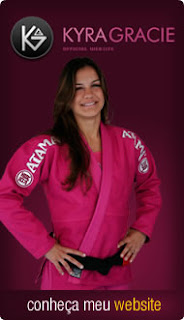 I Started my year competing at the Europeans in Portugal. Unfourtunaly things didn´t happen the way i planned.

First i had to cut six kilos to compete in this  weight division.Ten days before the tournament i went to London, where i teach a seminar in Birminghan and after i stayed with my friend, also a world champion, Braulio Estima. It was so cold that i had to train with socks, pants and sweaters under the gi.


Three days before i went to Portugal, wheight was fine, pink nails and gi ready.
Tournament's day. First fight were schedulle to 11 30 am. I woke up early, had a good breakfast. Just to be with all competitors i was already feeling the adrenaline of the tournament.

I got to the gymnasium, it was very close to my hotel. i did a very good warm up, my weight was right in the limit so i could not eat anything. they called my name, now its time.

In my brackets i had just competed with Leticia Ribeiro, but she was on the other side, so we could only met in the finals.

I submitted my oponnent in the semi-finals, so i was waiting for the other side of the brackets to see who i was going to fight against. Marina Ribeiro vs leticia Ribeiro, both had chances to go to the finals. Marina won and in two hours we are going to face each other.

I watched her competing some times and some days ago i received a message from her saying she had me as a role model.


Now it's time to start, mat number 2. We started the fight, she pulled guard, her favorite technique.I was trying to pass, but she was very flexible, she swept me, now its 2 points. We kept going, foot locks kneelocks. " minutes to go i was still in her guard , trying to pass, started going really hard, if i pass i can get 3 points and would win the fight. The time was over, 10 minutes passed so fast.


Came back with a silver medal. The Europeans is the only medal that i don`t have. So i have to go back stronget next year

All the best !!! Check my webpage